About the Baha'i Faith

What does it mean to be Bahá'í-inspired?

The International Environment Forum (IEF) was founded as a Bahá'í-inspired professional organization for the environment and sustainability, and its membership is largely composed of scientists, academics, experts and educators working in relevant fields. What then does it mean to be Bahá'í-inspired? The IEF draws on the ethical and spiritual principles of the world’s religions, in particular the Bahá’í Faith, as a complement to scientific knowledge in addressing the challenges of environmental management and sustainable development. These principles include the oneness of humankind, unity in diversity, moderation, the vital importance of ecological balance, and the fundamental reality of increasing levels of cooperation, complexity, and reciprocity throughout the planet.

A scientific understanding, by itself, is usually not sufficient to change human behaviour. Motivating change, either in individual lifestyles and consumption patterns, or collectively in communities, enterprises and government, requires a commitment to moral principles or human values and some vision of social improvement that science, by itself, does not provide. It is this interface between ethics and science that the IEF addresses.

While the International Environment Forum has no direct connection to the institutions of the Bahá'í Faith, it draws inspiration from the Bahá'í Writings, and many of its members are Bahá'ís.

ABOUT THE BAHÁ'Í FAITH

The Bahá'í Faith is an independent world religion with consultative status at the United Nations. It is widely recognized for its tolerance, its openness and its contribution to better understanding between races, religions and cultures. Founded over 170 years ago in Persia, it is now established in more than 100,000 localities within 235 countries. Geographically, it is the most widespread religion after Christianity. Its founder, Bahá'u'lláh (1817-1892), renewed the essential spiritual truths of all religion while adding the social teachings necessary to establish the oneness of humankind and to provide the spiritual basis for a united world.

Bahá’ís believe the crucial need facing humanity is to find a unifying vision of the future of society and of the nature and purpose of life. Such a vision unfolds in the writings of Bahá’u’lláh. 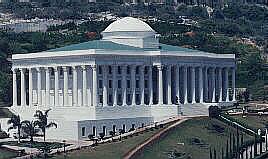 Bahá'ís are celebrating the bicentenary of Bahá'u'lláh on 22 October 2017. Bahá'u'lláh was born in Teheran, Persia, in 1817, and died a prisoner in Akka, Palestine, in 1892. He not only renewed the moral principles that are the foundation of all religions, but provided the social teachings necessary for building a world civilization whose coming He anticipated, hence His relevance to the environment and sustainability.

He taught the harmony of science and religion as complementary domains of knowledge and experience. “Great indeed is the claim of scientists and craftsmen on the peoples of the world.... In truth, knowledge is a veritable treasure for man.” Long before the 2030 Agenda and the Sustainable Development Goals, He called for an integrated approach drawing on both science and religion, which need to be in balance for society to advance: “Regard ye the world as a man's body, which is afflicted with divers ailments, and the recovery of which dependeth upon the harmonizing of all its component elements.”

He warned of the dangers of the excesses of material civilization: “If carried to excess, civilization will prove as prolific a source of evil as it had been of goodness when kept within the restraints of moderation.”

He called for simplicity in lifestyle: “Take from this world only to the measure of your needs, and forego that which exceedeth them. Observe equity in all your judgements, and transgress not the bounds of justice, nor be of them that stray from its path.”

He emphasised justice as the central principle of social organization: “The best beloved of all things in My sight is Justice.... By its aid thou shalt see with thy own eyes and not through the eyes of others, and shalt know of thine own knowledge and not through the knowledge of thy neighbour.”

While he did not propose a specific economic system, He said that everyone should have an occupation, so society must give everyone the opportunity to work for both its material and spiritual benefits. “It is incumbent upon each one of you to engage in some occupation - such as a craft, a trade or the like.... Waste not your hours in idleness and sloth, but occupy yourselves with what will profit you and others.” Extremes of wealth and poverty should be eliminated. “Man's merit lieth in service and virtue and not in the pageantry of wealth and riches.” Following these teachings, it is clear that now is the time to abandon outworn ideologies and economic systems that no longer meet the needs of society, and to experiment with new approaches, starting at the community level.

Bahá'u'lláh can be seen as a precursor of the environmental movement and an early exponent of sustainability. The lessons being learned in Baha’i communities as they try to put His teachings into practice can also serve as examples for possible ways forward towards sustainability.

More on the life and teachings of Bahá'u'lláh can be found here.