Humanity's shared destiny as a species is coming into ever greater focus through compounding crises and tremendous societal advances, yet our current institutional structures are struggling to meet the demands of this moment. This dialogue, in honor of the Stockholm+50 conference, explored both the ethical foundations and practical proposals necessary for our governing systems to ensure a flourishing relationship between humanity and the natural world. 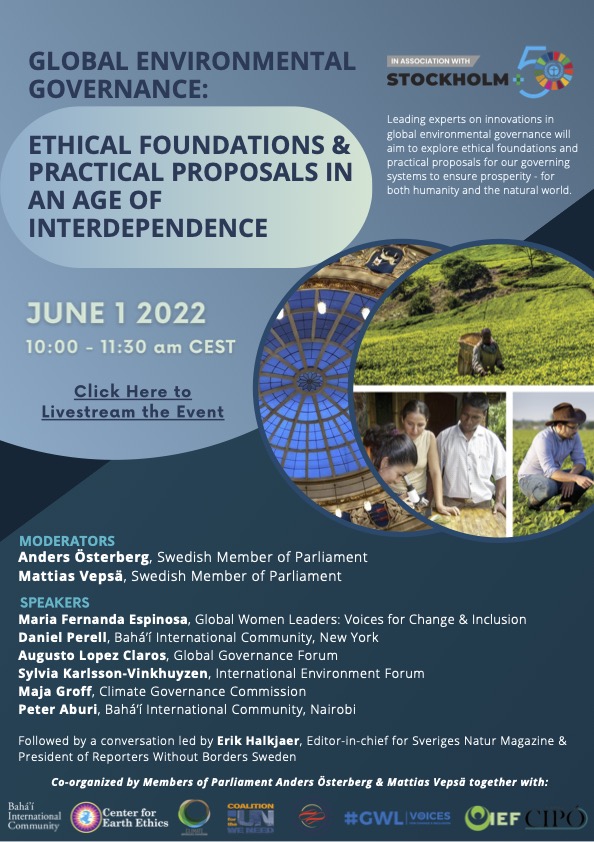 The Bahá'í International Community event on 1 June 2022 was held in the Dag Hammarskjold Room in the Swedish Parliament, hosted and moderated by Swedish Parliamentarians Anders Österberg and Mattias Vepsä. The subject was Global Environmental Governance: Ethical Foundations and Practical Proposals in an Age of Interdependence. 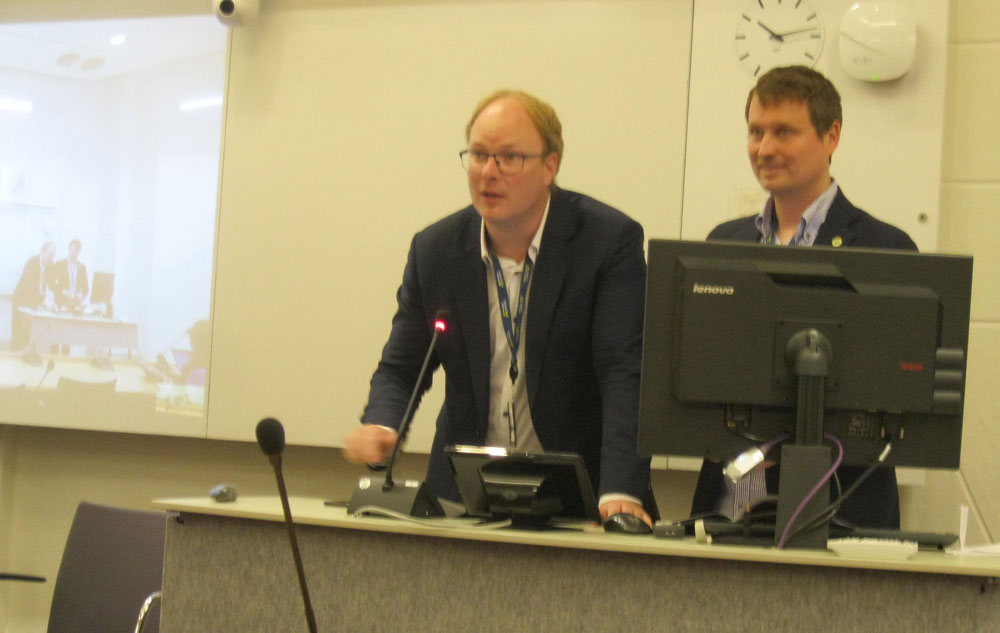 The first speaker, Maria Fernanda Espinosa of Global Women Leaders: Voices of Change and Inclusion asked what challenges were ahead. Despite our advances in science, the Sustainable Development Goals and 2,000 multilateral environmental agreements, we have evidence of collapse. Environmental governance is fragmented in silos, requiring something like an umbrella global pact for the environment. We need to rethink national interest to place the commons over sovereignty. Consumption and production patterns need to change, as should political narratives beyond growth. We need other measurement tools than material wealth. We see war diverting resources towards weapons. We can still have hope and responsibility as we re-frame the definition of wealth, recognise that nature has rights, acknowledge the need for multiscalar governance, and accept the power of human agency, of youth and science. Value-based leadership can take us from greed to solidarity, from indifference to radical love.

Daniel Perell of the Bahá'í International Community launched their new statement "One Planet, One Habitation". He reminded us that Stockholm 1972 was only the beginning, and our efforts are continually being refined, with new needs now. We must question our assumptions and deliberate on the next steps, challenging the present selfishness, greed and apathy, and asking how to inspire as we go forward. 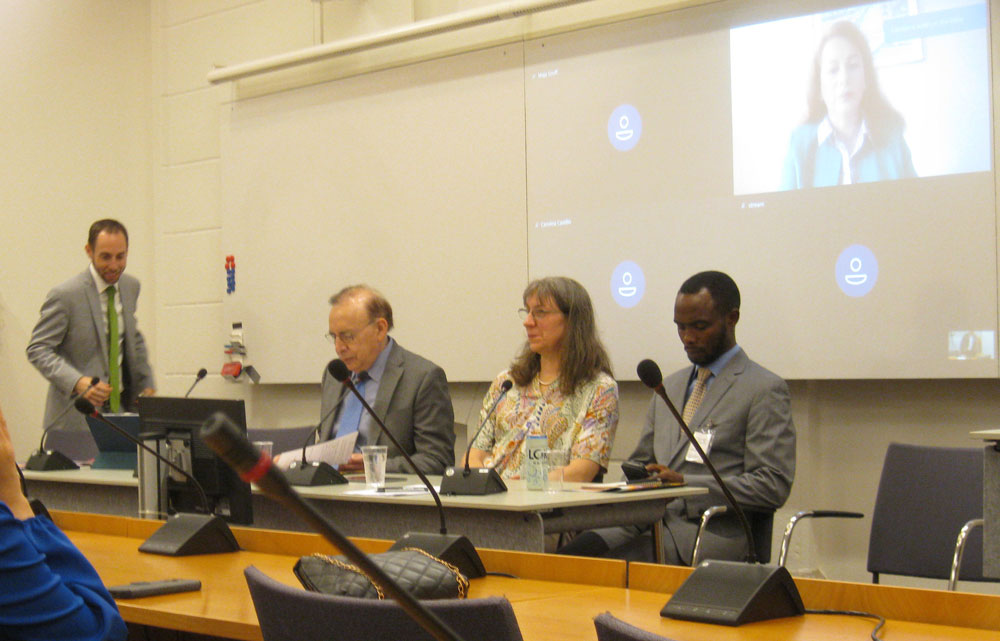 Panelist Augusto Lopez-Claros of the Global Governance Forum addressed the role of public policy in mitigation climate change, either by making conscious choices or waiting for the suffering from breakdown to force us to change. He cited the case of the Black Plague in Europe as a previous crisis that was hard to interpret. We have known since 1896 that CO2 in the atmosphere and temperature are related, and the cause of climate change, but we have a flawed institutional framework, a lack of imagination and political will, and selfishness to blame. The solution needs to be rethinking the economic system to consider the long-term welfare of the community and other ways to measure success. Economic growth has reduced poverty and extended education, but it needs to be consistent with environmental protection, human rights and narrowing disparities. The recent shocks of the pandemic and war show that we must rethink national security beyond a military concept to human welfare. From an economist's perspective, we need to invest $75-90 trillion in energy efficiency and renewable sources to preserve the gains of the last 70 years, but we have spent our way out of the financial crisis, and there are proposals for alternative sources of revenue, eliminating harmful subsidies and closing tax loopholes. The choice is up to us to start a new stage in human evolution.

The next panelist Sylvia Karlsson-Vinkhuyzen of Wageningen University and the International Environment Forum imagined what a country would be like if laws were made by consensus where anyone could veto or ignore them, with no police force or courts. How could you establish the rule of law or justice? This is the situation in the world today with absolute national sovereignty. Yet a country's decisions can have impacts far beyond their borders, so we must accept our interdependence and common humanity. There are UN proposals for an envoy for future generations and a revised Trusteeship Council, but these are only advisory. No one has responsibility for the common good. Parliaments, in making laws, should expand their vision to consider the trusteeship concept and the implications of their laws beyond their borders. They should take the lead in holding governments to account for their international obligations, asking if the country is doing its fair share in each global effort. We have a lot to learn about living in an age of interdependence.

Maja Groff of the Climate Governance Commission described this inflection point in history as a moment with great hope and challenges for breakdown or breakthrough as described in Our Common Agenda. Humanity's future depends on solidarity, with new levels of wisdom and imagination. The Climate Governance Commission is filling a gap, building partnerships as we are faced with irreversible tipping points in a state of climate emergency. Its interim report has many concrete proposals for finance, legal accountability and governance. While there is little chance for a convention on forests, a multistakeholder task force is exploring how commodity supply chains could adopt responsibility and accountability, bridging the north-south divide. We must act to acknowledge our interdependence and collaborate.

The final panelist, Peter Aburi of the Bahá'í International Community office for Africa looked at practical proposals. The future we must build together is now. The science is there, the discourse is evolving, so now is the time to act. We need to stop thinking in silos, and go beyond national sovereignty. With the pandemic and war, commodity prices in Kenya have tripled. We must rethink our economic systems and address north-south income disparities. People need practical things to keep going, like regenerative agriculture. There should be priority to the common good, with responsible choices and accountability mechanisms, overcoming the greed and selfishness of multinational corporations. This will take political will and thinking creatively. There are good things happening, building forward with points of unity, and even joyful celebration.

The following discussion explored ways to close the gap between knowledge and action. For example, in the 2015 Paris Agreement on climate change, commitments were voluntary, but there was a mechanism to ratchet up commitments every five years. To deliver on its objectives, political will must go beyond national interests. Greed and apathy must give way to solidarity for those who are suffering from climate disasters. There is a false dichotomy between the war in Ukraine and climate change, as any reduction in climate change action will bring higher costs in the future. There are efforts in leadership for net zero, and to educate the public. The role of the Marshall Islands in the success of the Paris Agreement shows how one country can push exciting ideas, but today any nation can block action. We must change the narrative from short-term to long-term, from national interest to the common good of all, with value-based leadership. For example, slavery was abolished after thirty years of Quaker lobbying. This will not be easy, as sacrifice will be needed, in a spirit of solidarity. One problem is multilateral environmental agreements working in silos and not effective, when all problems are interrelated in the Earth system. We need an overarching coherent framework for compliance, perhaps restarting the effort for a Global Pact for the Environment, with mechanisms to govern the global commons. This means redefining national interest as security for humans and the environment, with shared sovereignty.

In closing remarks, the representatives of the Bahá'í International Community noted that governance today is largely grounded in an adversarial paradigm, leading only to temporary solutions. We need a new non-adversarial approach, using the power of narrative to motivate populations. We should start by building the capacity of individuals, which will lead to better communities and impact the institutions. People want their representatives to stand up for values and live their principles. If we keep reframing our thinking, we can make it happen.

In the afternoon, this was followed by a conversation led by Erik Halkjaer, Editor-in-chief of Sveriges Natur magazine and President of Reporters Without Borders Sweden, with Anders Österberg, Sylvia Karlsson-Vinkhuyzen, Peter Aburi and Arthur Dahl. He had previously interviewed and published a profile of IEF President Arthur Dahl as someone who had participated in the 1972 Stockholm Conference. He was impressed by the deep wisdom and ethical importance of the Bahá'í-inspired approach, demonstrating the transformation necessary, and wanted to discuss practical suggestions such as how accounting for biodiversity could be a solution to the climate crisis. Can the UN be made to work?

Arthur Dahl responded that climate change was largely driven by a materialistic economic system with progress measured in money, with short-term profits made from fossil fuels, deforestation, intensive agriculture and other major sources of greenhouse gases. He proposed an alternative global systems accounting with scientific, non-financial measures such as the carbon cycle for energy flow, including the role of biodiversity in sequestering carbon from the atmosphere, and identifying sources of and responsibilities for pollution. Similar accounting could cover requirements for human well-being. This would create positive incentives for the needed fundamental transformation. For the UN to work more effectively, it needs to accept a central orchestration function, determining the scientific requirements to protect the planetary environment and allocating responsibilities for implementation. Governments cannot do everything, so there is a need to govern the actions of multinational corporations.

Sylvia Karlsson-Vinkhuyzen highlighted the need to raise perspectives and accept sacrifices for the common good. There are different ways to work for change: adversarial or cooperation in unifying efforts. Governments have accepted common goals, but unlike the national level, all one can do is plead and appeal for action. The UN system could focus more on biodiversity and nature as fundamental to human well-being. In IPBES there is a transformative change assessment underway, looking beyond the silos. We need new accounting systems and insightful institutions. The UN is not focussed on efficiency because its budget is too small and its efforts stifled.

Peter Aburi referred to multinational corporations with no real commitment to the environment, just greenwashing. Corporate lobby groups hide behind civil society organizations. The grassroots could be a lever for change, with farmers producing sustainably, not using chemicals but using local methods to protect ecosystems. It is also necessary to educate consumers, who too often do not care what is behind what they buy, and are responsible for food waste and its emissions. There are values-based businesses that reduce consumption and protect the environment.

Anders Österberg asked where to push? There is a food crisis in Asia and Africa, but no one cares. People care about climate change but do not know what to do. Since his concern was mostly human rights and democracy, we could broaden the debate. People still think about me and my country, yet the Ukraine crises shows the need for world order. He asked what is needed from the UN to get countries to step up, both for more aid to poor countries and more to the UN. Now countries are cutting their aid budgets, and even shifting funding for aid to recent refugees from Ukraine.

It was clear that there were no easy answers to many of the questions raised. 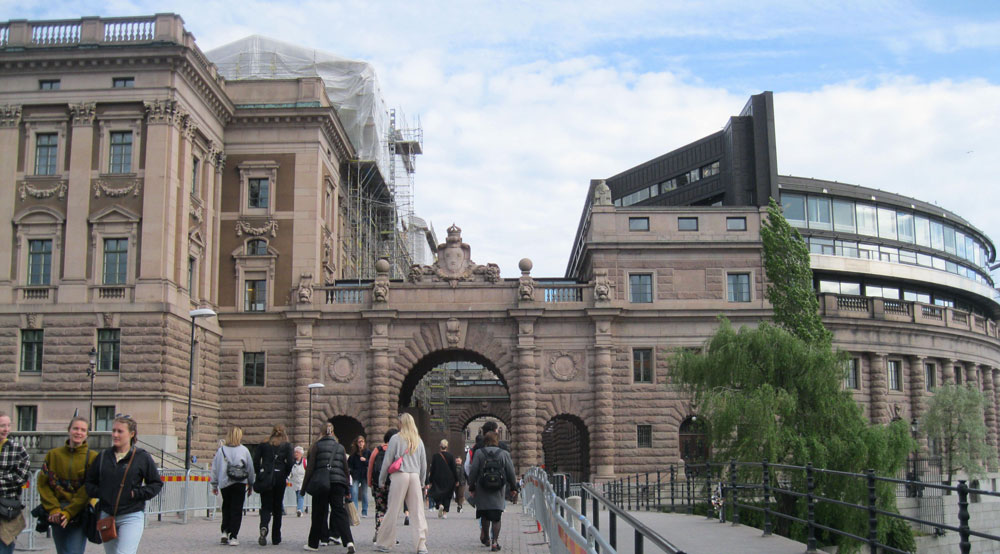 The panel was organized by the Bahá'í International Community in partnership with a number of organizations including the International Environment Forum. It was live-streamed, and the recording of the main event as well as the last part of the afternoon conversation can be viewed here.

See also the BIC news release of 1 June and the Bahá'í World News Service story on 16 June, as well as a short video report.