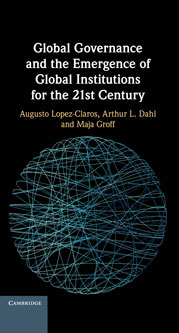 As the world teeters on the brink of any number of global catastrophes from climate change to the increasing temptation to use weapons of mass destruction, and where hope for world peace is receding, it is time to put global governance back at the center of international debate. IEF members Arthur Dahl and Maja Groff, together with Augusto Lopez-Claros, have done just that in their new book Global Governance and the Emergence of Global Institutions for the 21st Century published by Cambridge University Press on 23 January 2020. In over 500 pages of careful reasoning, they lay out the deficiencies in the present United Nations system and propose all the changes necessary both to correct flaws built into the UN Charter at its inception to make it acceptable to the victorious powers defending their national sovereignty, and to adapt it to the needs of a global system facing new challenges that did not exist in 1945. In this year of rethinking the role of the United Nations on its 75th anniversary, positive proposals to face and resolve global catastrophic risks are needed more than ever.

Part I of the book provides the background, reviewing the challenges of the 21st century, providing a short history of proposals for global governance and the first real steps in the League of Nations and the United Nations, and looking at the example of European integration after World War II, starting with a Coal and Steel Community and building the supranational institutions of the European Union step by step as trust was built that interstate cooperation could work.

The second part of the book presents proposals to reform the central institutions of the United Nations to give it the competencies in legislative, executive and judicial functions that are taken for granted in national governments but are still limited at the global level.

The General Assembly would be reformed with proportional representation and the power to adopt binding legislation in those areas requiring global governance, including peace and security and the global environment. It would be supported by advisory mechanisms, including scientific advice across global issues such as climate change, biodiversity loss, atmospheric and oceanic pollution, and management of the global commons. Technology assessment of issues such as geoengineering, nanotechnology, gene editing, and artificial intelligence would provide the basis for global legislation prohibiting dangerous and encouraging constructive uses while applying the precautionary principle. An Office of Ethical Assessment would ensure that fundamental human and environmental rights and responsibilities are considered in any measures adopted. A Second Chamber of Civil Society would allow all the major groups and stakeholders to propose and comment on the necessary actions to protect the common global interests of humanity and the planet. One immediate step that could catalyse progress in this direction would be the creation of a World Parliamentary Assembly already under discussion.

At the executive level, the disfunctional Security Council would be replaced by a UN Executive Council chaired by the Secretary-General, with all governments having a voice and none a veto. It would oversee the effective management of the UN System, with subsidiary bodies for disarmament, mediation and conciliation, and an International Peace Force able to implement decisions for collective security to ensure world peace. The transition to collective security would require carefully staged and balanced reductions in national armaments as the international force becomes operational, while the human and material resources presently devoted to unproductive military expenditures would be redirected to constructive uses. An independent UN funding mechanism would ensure adequate resources to carry out the necessary functions of global governance.

To give global governance the capacity to manage the multiple global risks that threaten our future, the UN Specialized Agencies would be enhanced and completed with agencies for global economic management and regulation of the private sector, and to reduce inequalities within and between countries. The global financial architecture would be reinforced and the International Monetary Fund given the capacity to address threats of financial collapse. Responding to global environmental crises requires that the many environmental conventions should be consolidated under global legislation for effective management of climate change, biodiversity, chemicals, plastics, and the equitable distribution of natural resources. Global management is also needed to deal with population imbalances and the inevitable mass displacement of populations being triggered by the climate crisis and sea level rise.

The book gives particular attention to cross-cutting issues such as corruption, the destroyer of prosperity that has now reached a scale requiring international enforcement. Major attention also needs to be directed to education for transformation, so that all lesser loyalties are subordinated to a sense of global citizenship as members of one human race.

The last part of the book explores the values and principles necessary to underlie an enhanced international system, so that global good governance can be operationalized. This is required both to build public support and participation in governance at all levels, and to ensure that all those working within the international system and contributing to its processes believe in its values and are there to be of service to all of humanity.

The big question, of course, is how to get from here to there. The book discusses some immediate steps forward, and explores scenarios of alternative future paths. Since previous steps towards global governance were the result of the terrible suffering of World Wars I and II, it is possible that another crisis will be necessary to push governments to act finally in their own common interest. Launching the debate now on bridging the governance gap at the global level, by showing that UN reform is not impossible and that there are practical ways forward, should prepare the way for rapid action once the inertia of the present system is overcome.

While there will obviously be opposition to these proposals, particularly by vested interests in the present system and the contrary forces rejecting multilateralism, there is no real alternative in a globalized world to achieving effective global governance. The longer we resist, the more painful will be the transition. In today’s globalized world, national sovereignty has been eroded to almost nothing. For more than a century, the world has ignored calls to acknowledge that the Earth is one country and all humanity its citizens. Now the planet itself, through the climate catastrophe and biodiversity collapse, is sending us signals that we ignore at our peril. Everyone everywhere needs to take this message to heart. All of our governments need to be pressured to acknowledge that their national autonomy can only be guaranteed by an effective global government. The more governments come on board to support these proposals or others like them, the sooner can the process of building global governance for the 21st century get under way.