Since winning the New Shape Prize for the proposal “Global Governance and the Emergence of Global Institutions for the 21st Century”, the effort now is to make these proposals for UN reform known to a wider audience. IEF is hosting a web page for the governance project while its own web site is still under development, including a report on the awarding of the prize and a recent paper describing the evolution of the proposal.

The team of Augusto Lopez-Claros and IEF members Maja Groff and Arthur Dahl has expanded with the support of the Global Challenges Foundation to include IEF members Sylvia Karlsson-Vinkhuyzen and Joachim Monkelbaan, as well as some distinguished experts including a leading anti-corruption judge from Guatemala, and a former Chief Justice and President of Bolivia. The working group met in Paris on 9-10 November to work on their book to be published next year by Cambridge University Press. 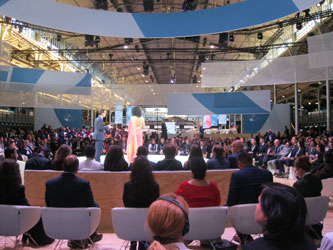 They were then invited to present their proposal, along with other winners of the New Shape Prize, at the Paris Peace Forum convened by French President Macron on 11-13 November. The Forum was opened by a gathering of world leaders including the UN Secretary General and many Heads of State. This was followed by two days of debate on solutions working for peace in the world and supporting multilateralism among the leaders of 120 selected projects from around the world. There were stands in the Space for Solutions, pitches to present the many projects invited to participate, and forums for discussion of the themes considered, with many opportunities for networking and collaboration. A declaration on trust and security in cyberspace was signed by many governments and internet companies. Launchings included a Pact for the Environment and a report on Information without Borders. A hackathon assembled 80 participants to develop 15 solutions to international problems. The Paris Peace Forum will become an annual event in November each year, possibly with regional Peace Forums in between. 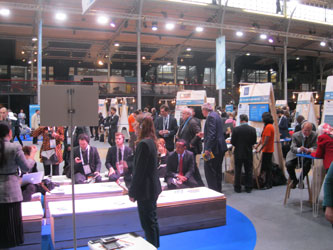 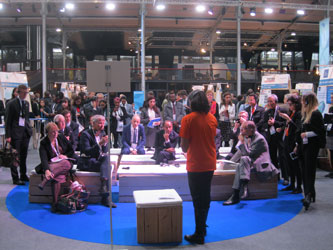 Joachim Monkelbaan has also led a team with a programme for a Sustainability Leadership Lab that has reached the semi-finals in the Educator’s Challenge of the Global Challenges Foundation, which was also featured at the Paris Peace Forum.

In addition to the Paris Peace Forum itself, the IEF members presented their project to an enthusiastic group of a hundred students at Sciences Po, the prestigious French university of political sciences, organized by their United Nations Association, and at two events at the French National Baha’i Centre. 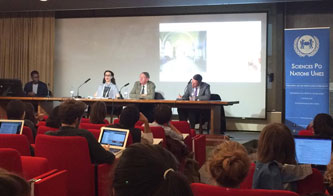 Lecture on governance at Sciences Po

Arthur Dahl continued on to London to participate in a luncheon on 14 November at the British Parliament in commemoration of interfaith week and the twin anniversaries of the birth of the founders of the Baha’i Faith. The luncheon, organised by the All Party Parliamentary Group on the Baha’i Faith, was held in the Churchill Room of the Houses of Parliament, with Members of Parliament, religious leaders and other dignitaries in attendance. Arthur was the featured speaker on Integration in a World Community, describing the need for more effective global governance and outlining the proposals for UN reform. This was followed by an evening meeting for youth at the United Kingdom National Baha’i Centre.